I had the most wonderful Valentine’s Day: Adam, not so much. After two delayed days, our city tour finally took us up Sugarloaf Mountain.  The day was beautiful and cloudless! When Andre arrived he said our tour would be going on a little later than planned, but that we would be having a fabulous buffet churrasco after the mountain and that it would be a great time. I was excited, but unfortunately, Adam already had a date at 12:30, that was much more important than hanging out with me. So, we went our separate ways and I left for the tour while Adam stayed behind. The tour was supposed to end about 1:00, so we agreed to meet back at the hostel sometime around there, although I had no problem waiting if Adam was a little behind.

So off I went in the van to Sugarloaf! In total there were 7 of us, 4 Brazilians, 2 other Canadians and myself. I was thrilled that there were other English speakers on the trip, since I was dreading another tour entirely in Portuguese. Katelynn and Scott, are both from Toronto and they are the most wonderful couple we’ve met on the trip so far! (If you guys read this, it’s true, we are so glad to have met you! Hopefully our paths will cross again!). So naturally, I clung to my fellow Canadians throughout the afternoon. I don’t remember any of the stats about Sugar Loaf Mountain, except that it took 3 minutes on the gondola to reach the top (and even then I’m not sure If that was for the first peak, or the second). But I do know it was STUNNING! The view of the city was gorgeous. It looks down over Copacabana, and across to the Christ the Redeemer statue. Another beautiful 360 degree view of Rio checked off my list! 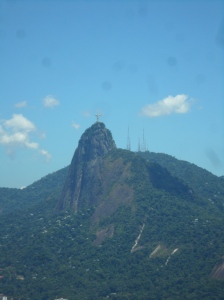 I knew I would get along with Katelynn and Scott immediately when a quarter of the way through the trip they suggested grabbing a beer from the concession before going further: so we did. Immediate best friends.  Then we caught up on each other’s travels, and took touristy photos from every angle possible.  It was a wonderful time!

After Sugarloaf it was time for the Churrasco (Brazilian BBQ).  This was the most elaborate buffet I have been to yet! A plethora of barbequed meats, salads, starches, seafood, fruit platters, sushi, desserts, It was all available.  So, I crashed Katelynn and Scott’s romantic lunch, and was third wheel to a couple I met only hours earlier on Valentines Day.  Impressive, I know.

Once the BBQ was finished, I was dropped back off at the hostel. It was about quarter after 3 and I felt bad that Adam was probably waiting for the better part of 2 hours for me; however,  when I walked through the front door, the receptionist handed me a note: “Hey Hil, still out, be back as soon as I can”  Uhoh!

So Adam’s Valentines Day plans actually started a day earlier. We were running errands after the Favela tour – i.e. I needed to get 4000 types of mosquito repellant so I don’t get eaten alive in the Amazon. While we were at the pharmacy, Adam figured he would pick up Malaria pills that he didn’t get in Canada before he left. No big deal, I did this is Bangkok and saved myself hundreds of dollars! What we then found out, unfortunately, was that Brazil and Thailand have different laws on prescription medicine. In Thailand you can probably get heroin handed to you over the counter for $1, in Brazil, prescriptions are needed for everything, or so we thought, just like in Canada.

So the pharmacist sent us to the hospital a few blocks up to speak to a doctor. Ya, like our Portuguese is good enough to figure this out at a hospital! Nonetheless, off we went.  We knew we were in trouble when even the receptionist didn’t know what we meant when we handed her a piece of paper with “I need a prescription for Doxicycline” translated into Portuguese. Luckily, a random man nearby spoke English well enough to help us out. Turns out, we were in the wrong place.  “You need to go to emergency,” he said. “No, no” we explain, “Adam doesn’t HAVE malaria, we just need a prescription”. Still, need to go to emergency. So we walk over to emergency and can’t even figure out how to grab a number to wait in line! We’re never going to make it. Then all of a sudden the man from earlier comes in and wants to make sure we’re all right.  Everyone in Brazil is SO nice. He helps us through the whole process, and we sit and wait to be called.

Once we get into the room, the doctor has to go get a translator who can help us out. We explain our situation and the doctor shakes her head. “No, we only TREAT malaria, not write prescriptions. If yo need one you have to go to the free clinic a few blocks away; unfortunately, it closes at 4:00 which is three minutes ago.” Luckily, she tears up Adam’s form, so he doesn’t need to pay $280 just to SEE the doctor!

So thus begins Adam’s Valentines Day. He got up early to be at the free clinic by 8:30. No one could write a prescription there until the doctor arrived, so he makes an appointment for the only available time 12:30 – thus his previous engagement as mentioned earlier. By 3:15, when I got back from my awesome day of touring and eating, Adam was STILL waiting at the clinic. I went down to meet him, and we crossed paths a couple blocks from the hostel. I look inquisitive; Adam shakes his head. “No prescription”.  Apparently, he had spent the better part of the day staring at a white wall, watching patients go in and out of rooms, until finally he asked about his doctor. “Nope, she’d left the hospital to work at her other job across town”. Fabulous. We then heard there was a malaria injection that was quick and easy. We asked about that, and “yes!” they could do it. So Adam gave his passport and information, we waited a couple minutes, then the nurse turned to us “sorry, we ran out for the day. We have yellow fever shots only now. Come back tomorrow”. Unfortunately, we had a 15-hour bus ride to be on in a couple hours, so we’d have to try in Salvador: we left defeated. Productive day. We spent the remaining hours of Valentines Day stuck on a bus, headed to God knows where, 15 hours north of Rio.

In the end, it turns out you can “trick” pharmacists, when you drop the word prescription from your note, and translate Doxycycline to the Portuguese equivalent “Doxicilin”.  Then, they will freely hand over the drug! We later bought the pharmacy in Olivenca out of drugs. The rest were easily obtained in Salvador. Thank goodness!