Adam is pumped to finally be at the Amazon River

To be honest, we did nothing in Belem. We desperately needed to sleep and detox after Carnaval, and quickly got comfortable lounging around our hostel.  Soon, even the most menial tasks were overwhelming. Originally, we were supposed to spend 24 hours in the city.  It was going to be a quick stopover before we booked hammock space on a cargo boat and cruised the length of the Amazon River from Belem to Manaus.  When we arrived, however, we found out that a brand new boat was sailing for Manaus this upcoming Saturday.  The lady ensured us it would be very nice and, not being in much of a hurry, we decided to hang around for 4 days.

Each day we came up with a task to complete. Groceries. Laundry. Buy hammock. After we completed one task, we felt accomplished and could spend the morning and the evening catching up on reading.  So that’s what we did.  Our mornings were filled with LOTS of coffee drinking and writing; then, each afternoon we spent a little time at the market. 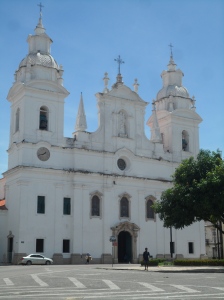 Belem’s market is THE largest open aired market in all of South America! It runs along the riverfront and holds just about everything you can imagine.  To begin with, there are rows upon rows of clothing: sweatshirts, t-shirts, football jerseys, bathing suits and the such.  Then Hammocks.  Hammocks are a very popular commodity in Brazil is seems, and Belem’s market had colourful, hand-woven hammocks strung up all throughout the stands. After that there were crafts, and trinkets, and carvings, and toys.  Then finally the food began!  Hundreds of cheap eateries all packed together in one area.  Each sold a version of fish and meat with the usual rice, spaghetti, beans and salad.  They had wooden stools to sit on, and one, very reasonable, price for everything (we paid a little less than $3US for a massive plate of food that neither of us could finish).  After the eateries were vegetable markets. Huge pallets of tomatoes, peppers, onions, and MANY things I’d never even seen before.  I’m assuming these were local to the area, and, with one of the most diverse ecosystem’s on Earth at your fingertips, I’m sure there were an endless number of unique foods sold there. After the fruits and vegetables, venders sold hundreds of little vials of liquids all labeled in Portuguese. It wasn’t until I looked in our guidebook later that we realized they were extracts from plants found in the Amazon jungle. They were natural healing remedies that the locals used, apparently, quite frequently! Bottles of coconut milk were sold, then the meat: live chickens, ducks, rabbits etc were in cages all waiting to be freshly picked for eating. Finally came the fish. The smell was horrid, as to be expected in an outdoor fish market, but the selection was incredible. Every day the fishermen go out early in the morning to fish, by 5am they are all back at port and selling their goods to the venders. It’s a hectic scene as people shout prices and throw around fish, trying to get the best deals (as we saw on our last morning when we passed on the bus early in the morning). 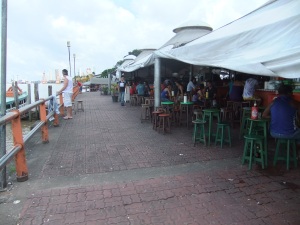 At the more “affluent” end of the market – which was enclosed and air-conditioned – there were loads of expensive buffets, small restaurants and a brewery. We found and acai berry shop and sat down for prawns and acai on our first day in Belem. We ended up sitting with a couple from California that we had literally met only 20 seconds earlier. They heard us speaking English, asked us where we were from, and we asked them to join us for lunch. Afterwards, we remarked how different things can be when you travel. I HIGHLY doubt I would invite a random couple for lunch on the sole fact that they speak the same language as me back in Vancouver! But it’s such a normal thing to befriend someone instantly when you are in a different country.

We all loved the acai. It is actually everywhere you turn in Brazil, so I’m amazed it took us this long to try it. At this place they sold it in litres; it comes out in a thick dark purple liquid that has a similar consistency to yogurt. It has a fairly bitter taste alone, and will stain your teeth purple in an instant, but, after adding a little sugar and tapioca, the stuff was delicious! Not to mention, it’s considered the super berry of the world with all the supposed health benefits it provides. We’ve had it several times since in Brazil, and I’ll be on the look out in Vancouver when I’m back!

Our lazy few days were easily pushed along by the weather. Although it was hot and muggy during the afternoon, by about 5 o’clock everyday the rains came in. I suppose that’s why the Amazon is considered a rainforest.  But these were not just normal rains; these were torrential thunderstorms that boomed across the city for a few hours each evening.  I have never heard thunder this loud before. The rain bucketed down in waterfalls all across the city and even within our hostel walls I jumped with every clash of thunder. The storm lasted just a few hours, then calmed down around 9 or 10. So we spent that time watching movies and playing cards: a far better alternative to bearing the storm outdoors!

When Saturday arrived it was time for the boat! We were up at a ridiculous hour of the morning (first from a man wailing in the halls of the hostel at 3am, and then from our alarm a couple hours later) to set up our spot on the boat and trek up the entire length of the Amazon proper!