Our final day in Ecuador, and our last day traveling with Diane, happened to be St. Patrick’s Day! Not that we’ve needed a reason to party on this trip, but if we did, this was as good an excuse as ever!  We ended up in Machala on the recommendation of a local Ecuadorean girl we hung out with in Quito. She said the islands just off the coast were her favourite part of Ecuador. At this time of year they have excellent ceviche and giant prawns caught fresh daily that are to die for. On top of that, there are apparently giant sea turtles swimming around the area (which we sadly didn’t see).

So we set out in the morning to Puerto Bolivar to catch a boat over to Jambeli beach on an island 20 minutes off the coast. Jambeli is a favourite beach for locals in the summertime, and the day we went was cloudless and gorgeous.   On our boat ride over, we met a Canadian guy named Steven. He was in Machala for a couple of days by himself; he had been traveling with his wife around Ecuador for a couple months and she was still inland while he visited some friends on the coast. He seemed like a really nice guy, and we invited him to have a drink and join us on the beach. When he’d spoken to us for a bit, the story came out why his wife hadn’t joined him to Machala. She was in the hospital recovering from some injuries. Apparently, 8 days earlier, the two of them had been hiking through one of the mountains inland. During the hike, three men attacked them and captured Steven’s wife. They took her hostage, and told him he had 2 hours to get them $3000 or they would kill her. So he ran back to the town they were staying at to get some money, he contacted the police, but they said even if he gave the men the money they wanted, the ending wouldn’t be pleasant. Either way, they came along to help him out. Meanwhile, his wife dealt with the three men in the mountains. Apparently, after one of the men tried to molest her, she fought back against them. They repeatedly punched her in the face until she grabbed their machete and started slashing them. When that didn’t stop them, she decided she’d rather die than be captured by them. So she hurled herself off a 50m cliff and fractured her skull and broke her pelvis in a few places: that’s where the police found her. Luckily, she is doing okay. She won’t be able to walk for a month, but she is in good spirits! The Ecuadorean government is helping as much as they can. They have paid for every medical expense, flown in her family, and have promised a free trip to the Galapagos for them when she recovers. They are also supposed to have lunch with the president in the next little while. It’s amazing the people you meet while you’re traveling isn’t it? I’m sure the government wants to keep this hush hush, but star magazine already has already released articles written about it in Toronto and Vancouver, on top of the several web articles and the news channels here in Ecuador.

So the four of us spent the afternoon drinking beers on the beach. The beach was lined with little restaurants selling food and drinks. Lawn chairs and umbrellas and tents (to change in) were set up all along the surf. The water was bath temperature and incredibly refreshing on such a hot day. Even I, who am usually such a wimp with ocean water, walked in without hesitation. We shared some seafood for lunch, which was unreal, and had a pretty incredible afternoon! Can’t say I’ve done any of these things on St Patricks day before! 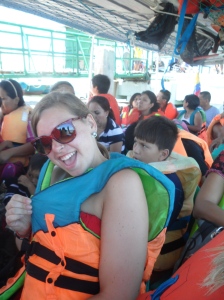 We headed back on the evening boat, then grabbed some more drinks before we headed out on the town that night.  Apparently Machala has a pretty fun nightlife, and the zona rosa district is the place to be on a Saturday night. What the Internet failed to inform us was that Machala is not touristy, and eeeeeveryone partying in the zona rosa is a local. The first busy place we walked into was a small pub full of locals. We got less than accommodating glares from the people inside and immediately felt unwelcome. Some guy threw a drink at us, and everyone else just stared. Needless to say, we left after one drink. We found a quieter bar/hookah joint a couple places down that was a little quieter. We ended up spending the rest of the night there, watching some couple dance salsa, chatting with the bartenders and enjoying cheap pitchers. It was a great way of spending our last night with Diane.