After a few hours of driving, we had reached the Tanzanian border. Already a new currency to figure out (and I still hadn’t figured out the Kenyan conversion yet). We were swarmed at the border by hoards of women selling beaded jewelry. They wore traditional dress, with long colourful capes, shaved heads and a plethora of piercings in their ears and nose. They followed us from Kenya to Tanzania trying desperately to get a dollar from us Mzungus. Other than that, the border was quick and painless and we hopped back in the truck.
Tanzania apparently has 117 different tribes within its borders. As you drive by the small villages and camps it’s amazing to see the women all decked out in Masai outfits, children slung in a blanket on their back and a 10 litre pail of water balancing on their heads. It seems like all the women carry things this way: bundles of sticks, buckets, or piles of goods wrapped in blankets. And yet their stroll is graceful and effortless… I have no idea how. And yet, city life in Tanzania seems to be an interesting mix between traditional and western culture; while one person herds goats along in a brightly-woven, caped outfit, the next person bikes along wearing jeans and a t-shirt.
Before long, we arrived at the Meserani Snake Park. This was to be our campsite for the evening. We struggled to set up our tent (which we have now mastered only a few short days later) unpacked our sleeping mats, and trucked off to the snake park.
The snake park was like a small zoo for snakes and crocs and turtles. Kelsi and I had an awesome time checking out the cobras and the scaly alligators for a good 45 minutes or so. We were only slightly put off when we saw a bunch of fuzzy baby ducklings huddled in the corner of one snake cage just waiting to be eaten. Ahh the sad facts of life! At the end of it all we got to hold a little snake of some sort and then we celebrated our bravery with a beer at the bar (which was conveniently attached to the park).
It was an early night for us after dinner as we had to be up early the next morning to make it to Karatu: our final campsite before our 3-day Ngorongoro Crater excursion.
In the morning, we set out to a nearby city to grab all the necessities for the Serengeti trek. Money, last minute snacks and an Internet cafe to book our accommodation for Zanzibar. We had an hour and a half to explore the place… I got nothing accomplished. After searching the streets for an ATM that was in service, we finally found a working bank and tried our luck. The MasterCard system is rare here in Africa, where most of the banks work through Visa (keep that in mind if you find yourself over here). Everything seemed to be going well at this ATM that we had found, until my card refused to pop out. I tried with some tweezers to grab it, when all of a sudden the machine shut off and sucked in my card. Great. So into the bank I went.
The bank was full of people lined up here and there. There wasn’t a line in the place shorter than 15 people. After asking some staff, and being placed in a number of lineups, I was finally moved to the end of a long queue at the back of the bank that moved slower than a glacier. Kelsi came to find me 45 minutes later where I had moved up a measly THREE people. No one was very helpful, and no one seemed particularly concerned with moving people along quickly. But a long story short, a little over an hour I was sent on my way with my bank card, no money, and told to use another bank’s ATM. The other ATM’s in the city believed I had already reached my daily withdrawal limit, and so, I was stuck borrowing the last bit of Kelsi’s cash to make it through the following three days.
After lunch back at the camp, we packed up and drove the two and a half hours to our new campsite in Karatu.
Karatu is only a short 20 minutes to the crater. We all had another early night so we could be up before dawn to start the day! 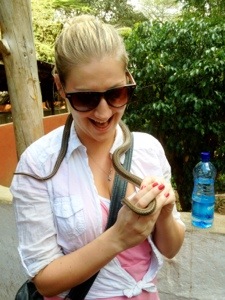 1 thought on “The Snake Village”