On our way to Jodhpur we demanded that we stop back in Jaisalmer to see the fort.
“No, no, is much nicer fort in Jodhpur.” Explained Raju.
No! We were exhausted of being told what and where we were going to see things. WE really wanted to see the fort. He said he would, but only because he liked us. Reminding us that he wouldn’t have done it for some other tourists… So much for “you choose the places you want to see!”
In the end, I’m so glad we made the stop. The Jaisalmer fort is bustling with life! Shop merchants and locals and guesthouses: the place was full of tourists and temples and most of all, history. Can you imagine living in this fort so many years ago? Before the city was built up around it? Before the smog rolled in and you could see out forever across the distance? Wow. The place was incredible. We walked the streets for a little while, took some photos of a view point and then headed back to the car. We had only one night in Jodhpur and we weren’t going to miss it.
Our hotel in Jodhpur was incredible, just like all the the others had been; however, I think this was my favourite. It had a swimming pool, very nice rooms, outdoor courtyards and a huge rooftop patio with an outstanding view of the Jodhpur fort.
The Jodhpur fort may have actually been more impressive to look at than the Jaisalmer one, and from right underneath it, the walls looks imposing and impenetrable.
For the afternoon we checked out the markets. Jodhpur is known for its delicious spices, so we spent some time smelling all the different curries and teas that they had to offer. It was hard not to buy everything in the shop! But we did manage to get a few small things to carry with us for the next month and a half (our bags are becoming so full we will soon fall over with the weight of them!). For the next hour or so, we wandered the streets, with Raju as our unnecessary body guard of course, and checked out the markets. The center of the market has a beautiful clock tower right in the middle. Below it is a chaos of motorbikes, horse drawn carriages and a herd of cows, all trying to co-exist with one another. Good luck!
Eventually, we strolled back to the hotel for dinner on the rooftop. Our hotel restaurant just happened to be the number one recommended restaurant in the Lonely Planet guide, so we didn’t have to go very far for a delicious meal.
In the morning we checked out the fort. Unlike the living Jaisalmer fort, the Jodhpur fort, named Mehrangarh, no longer has any permanent residents. The fort does, however, have some outstanding views from its outer ramparts and a museum that snakes it’s way through the inner castle. Once you start in the museum though, there’s no getting out! You have to move through the crowds of people, up stairways and down passages until the end of the tour. We didn’t realize this until it was too late. An hour later we escaped through the exit, exhausted from seeing throne rooms and decorated hallways!
When we finally found Raju back in the parking lot, we drove off to a nearby palace. We opted not to go inside, but had some spectacular views of the palace behind the lake. It didn’t even look real standing there! Finally, we carried on to our next stopover: Ranakpur. 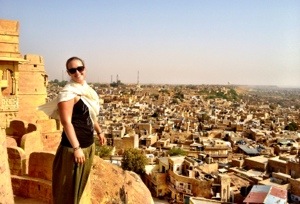 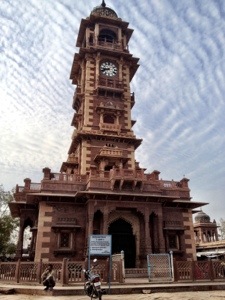 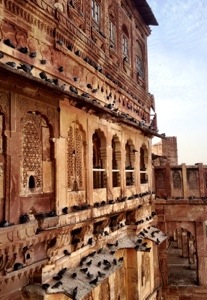 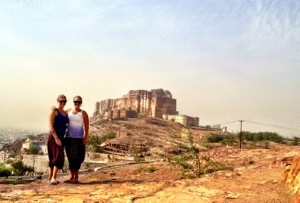