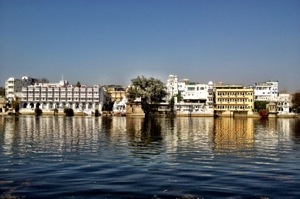 We arrived in Udaipur fairly late, so we just had dinner and called it an early night. We had plenty of things planned for the following morning!
Raju had us up and out the door by 9am.
“Go to the left here and you will see city palace, then you go to temple, then back to hotel. After you maybe rest, and I take you to lake 1:00. Okay? And if anyone says ‘you like guide’ or maybe ‘you buy something’ you say Chello!”
Ya, ya. We get it, don’t talk to anyone. So off we went. We made it the whole hundred meters on our own to the city palace. Go us.
What Raju failed to tell us is, that before 10am the cost to enter the city palace goes up EIGHT TIMES it’s usual cost.
“You know if you come back in one hour it will be much cheaper” said a man outside.
No actually, we didn’t know that! But we did now, and we weren’t about to pay that much money to get in. So we turned around and wandered through the markets!
The streets of Udaipur sell EVERYTHING! Clothing, leather bound diaries, hand painted door knobs, puppets, tourist trinkets, and anything you could ever need from a market. What Udaipur is best known for, however, is its miniature paintings.
The city has some incredible artists that paint out intricately designed paintings on small pieces of cloth or camel bone. The work is absolutely exquisite, although you can tell the difference in workmanship between shops. Some are much more skilled at the craft than others and yet every second or third store seemed to sell these paintings. Pictures of elephants, peacocks, camels: each animal symbolized a different attribute, whether it was love, luck or courage. It would take years of experience to perfect the techniques that’s for sure!
Kelsi and I wandered the markets for a few, until we found the temple we were told to check out. It was a gorgeous Jain style temple, sticking up tall and seemingly out of place, in the middle of the bustling marketplace. The white marble work was amazing, but after having seen the massive and elaborately carved pillars of Ranakpur we soon moved back to the markets.
Kelsi bought an anklet from one of the merchant stalls. “What metal is this made from?” She asked the man behind the counter. Nearly everyone promised that their jewelry was 92.5% silver and was of the highest quality.
“White metal” replied the guy. We had to chuckle. An honest vendor! I love it! “It won’t turn your skin green though, and the colour will stay like that”
“Will it break?” Asked Kelsi
“Probably.” He said nonchalantly.
Amazing! All we wanted was some cheap jewelry that looked decent. She didn’t even haggle with the guy. Just handed over the couple dollars he asked for and we all carried on happy! Why couldn’t everyone just be that honest?
We wandered down to the lake front and sat on the stairs, watching the locals come and go. It was relaxing and peaceful by the lake. People came and washed themselves and their clothes in the lake. They drank the water too, although I’m pretty sure that would have made Kelsi and I instantly sick. When 10am came along we strolled back up to the city palace.
The city palace was beautiful, but it had another one of those museums where you entered and then couldn’t leave again. And we realized why it was more expensive early in the morning. At ten, ALL the tourists in the world come to see the city palace. The place is cramped and hot and you can’t take a photo of anything properly if you wanted to! We didn’t have a guide, and so roamed aimlessly through the maze of rooms just trying to find enough space to breathe. In some rooms we were actually the spectacle. We had a woman ditch taking a photo of her boyfriend to instead have her photo taken with Kelsi and I. It’s become so common here that I’m almost used to it. I’m probably going to go home and have a couple ask me to take a photo of them, then I’ll sigh and get into the photo myself. It’ll be awkward to say the least.
About 5 minutes into the palace museum tour we got bored, but we couldn’t escape the throngs of people. We started playing our new favourite game with the artwork on the wall: I call it “man or woman?”.
The artwork that is displayed in the palace, and all of India for that matter, has a lot of gender suspicious paintings of people. Sometimes a man is painted in traditional garb, which looks like a dress. He has long hair pulled into a bun, necklaces, bracelets, anklets, and I even saw nail polish on one! Normally I would go ahead and guess woman, but not here! Sometimes it’s the beard that gives it away, other times its just a shadow of a beard, and other times its the social situation of the painting. “Nope, women weren’t allowed to do that, gotta be a man”. This new game is the only thing that got us through the palace in a sane state!
It took us over an hour of pushing our way from room to room, rushing past important monuments and getting lost trying to find the exits signs out of each room, to finally escape the palace walls.
“Let’s go home” we both agreed, and we went back to the hotel to freshen up.
At 1:00 we went to the lobby to find Raju. When he wasn’t there, we took the opportunity to escape.
“Let’s just leave a note and head out on our own!” We suggested. So we did:
Dear Raju,
We couldn’t find you, so we left for the lake on our own. See you at 5:00 for the sunset drive!
– Sunita and Anita 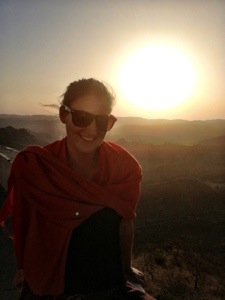 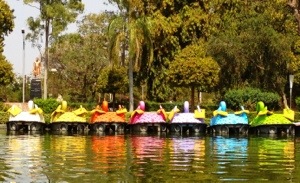 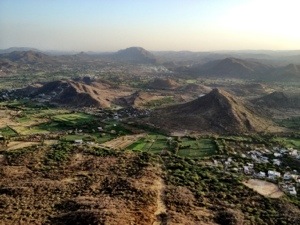 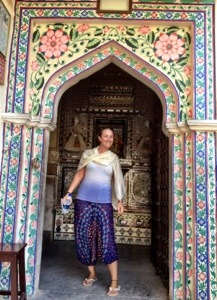 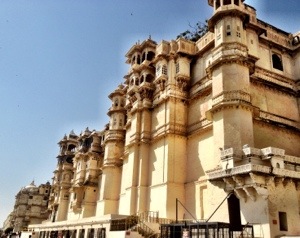 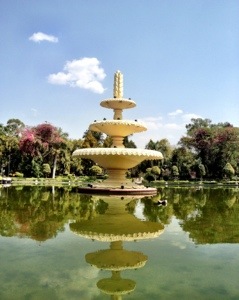 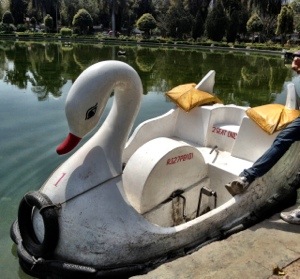 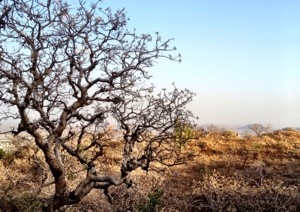 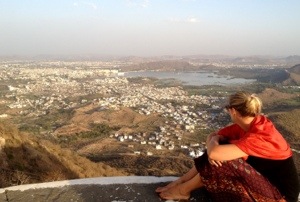