Jodon is slowly falling apart like an old man. I poke fun at him for this constantly. But the day we flew from Belgium to Prague it really hit. Walking 30000+ steps a day in new shoes finally caught up. He’d pulled a muscle somewhere in his left leg and was completely incapacitated. It’s a miracle we made it to the hostel in one piece. He hobbled along through the trains and busses and planes and sidewalks until we fell into Mojo hostel on the outside of Old Town Prague. And that was where he stayed, unmoving, for three straight days.

I felt so bad. Prague is Jodon’s favourite city in the whole world, and there he was, seeing it from the inside of a 6-bed hostel dormitory while I went out and explored. I came back occasionally: bringing food, drugs, frozen peas and pumpkin spiced lattes from Starbucks. But it was little consolation.

The extra strength ibuprofen and the gel I’d picked up at the pharmacy were making no difference. So after 48 hours of moaning and groaning I found a second pharmacy to ask for something stronger. The lady behind the counter spoke no English. Heaven forbid I have to act out ailments in a pharmacy AGAIN. Mortifying memories of Vietnam and Brazil came back to me. My pharmacy charades have had a low success rate over the years: remember when I was given hemorrhoid cream instead of aloe vera? I can only imagine what was going to happen this time.

After a couple minutes of acting out a pulled muscle, the lady stared at me blankly. I kept saying “Ibuprofen not strong” and she would repeat the same thing back to me. Then she smiled, opened up a drawer in her desk and handed me a small pack of pills.

“Strong” she said with a grin and what may have been a half wink.

It was as good as I was going to get. The pills were cheap, it was worth a shot.

I brought them immediately back to Jodon.

“Mmmmm, I’m not entirely sure. But they’re strong”

Turns out these little pills were a miracle. Within five minutes Jodon could move his leg a little without pain. In an hour he was hobbling downstairs to the common area. By the next morning he was walking again. He went from seriously considering taking the next flight home, to suggesting we grab a beer at the beer garden on the North side of town. I was SO happy.

So we did grab a beer. Years ago when Jodon was here with his friend Mike, the two stumbled upon this large park on the North side of Prague. In the park they had picnic tables set up and they served beer and kebabs from a little stand. The park was up a steep hill and had the most spectacular view of the city.

We sat there through the late afternoon playing cards and watching the lights on the city shift as the day moved along. It had been a rough couple days, but also a great excuse to relax and get some work done. We decided to book another three days in an AirBNB so that Jodon got a chance to spend some quality time in the city.

And even with a bad leg, we managed to explore the Prague castle, drink beers brewed by monks in the monastery and make a weak attempt to eat 1.5 kilos of pork knuckle at Hospoda Lucerna. Overall I’d say that Prague was a success. 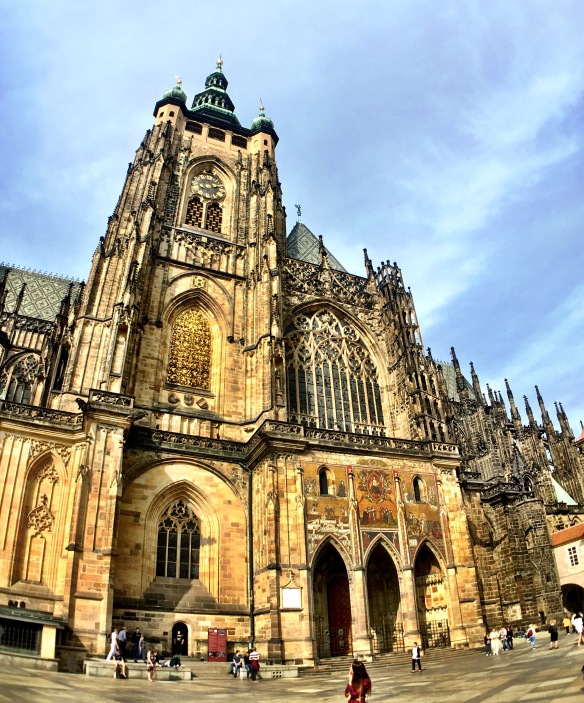 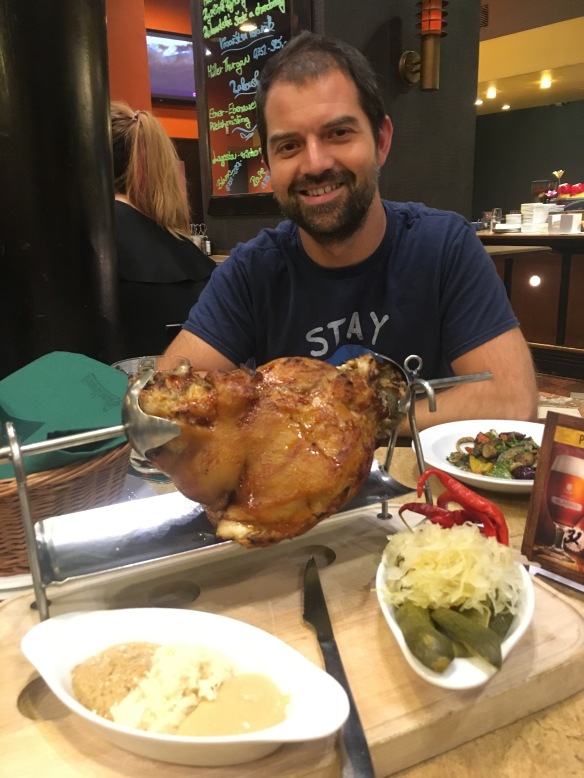