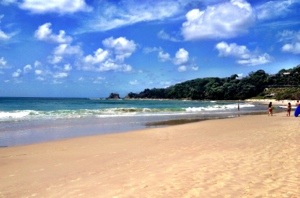 I feel like Byron Bay is the happy medium between crazy Surfer’s Paradise and relaxing Coolangatta. The beaches are perfect and the hiking is great. A person could spend the day relaxing at a cafe, or partying until dawn at the Cheekie Monkey. Something for everyone.
The Nomads hostel I stayed at was loud and party oriented and completely impersonal. But with hundreds of backpackers staying at the hostel, each nightly event was sure to be a big one.
My first evening there I got dragged into VIP night at the Cheekie Monkey pub down the street. $5 dinners and no line. Okay fine. I met an English Girl named Hayley who had also just arrived and the two of us set out towards cheap food and more chaos than we had expected…
Cheekie Monkeys is the be all end all of backpacker bars. They have cheap food, drink specials, thousands of dollars worth of prizes to give away, and some sort of event occurring every 20 minutes: for those with extreme ADD. Raffles. Speed Dating. Bikini Contests. Table Dancing. Any kind of bar game you could imagine. They gave away free skydiving vouchers. $300 worth of hard cash. Trips to the Whit Sundays. People were winning prizes, getting involved, or in Hayley and my case, getting dragged into being involved. We just barely escaped the speed dating round, only to be pulled up on stage with the three other girls we were with for some unknown contest. Oh god.
“This is a very easy game ladies and gentleman!” Said the guy on the mic “you ladies don’t have to worry about a thing!”
Right there I knew he was probably lying.
“All you have to do is find things that I ask for and bring them back to me”
Okay. Seems simple enough. Only rule was, you couldn’t get it from yourself.
And luckily it was that easy. A two dollar coin… Check. An unused condom… Check. A girl’s bra… Check. A sock… Check. A pint of water… Check.
Each one was done one at a time. Each item supposedly slightly harder to get than the last. The last person to bring up the item was disqualified, then the remaining were given another task.
“Okay!” Said the announcer “now that you have everything, I want you to take the bra, and put it on over your clothes. Then take the sock, and put it over the water glass. Then, through the sock, you have to chug ALL the water in the glass! First person to do so, wins a $400 dollar voucher for skydiving. GO!”
It was cruel. The socks were worn by dirty, smelly backpackers that had been sweating and dancing all night. Who knows when the last time those socks were washed! I thanked my lucky stars I had been forced out on the last round. But the four girls I was with were the last survivors. And they did very well…
After only a little hesitation, all four girls started chugging the water back through the socks. The girl who finished first choked back at the end and all the water came spewing out her nose. The crowd’s cheer was deafening. It was going to be one of those nights.
Welcome to Cheekie Monkeys: my first impression of Byron Bay…