The day I visited the Blue Mountains was perfect! Sunshine, warmth, hardly a cloud in the sky: a rare occasion for me on this trip. The two hour train to Katoomba went by in a flash and before I knew it I was wandering down the street towards Echo Point.
There are a million tour buses at Katoomba station: organized groups, private tours or hop on/off buses. Unfortunately, by the time I reached Sydney my budget had worn thin and the 30 minute walk didn’t seem so bad!
Approaching Echo Point was spectacular. Of course, there were thousands of tourists all milling about, but it didn’t take away from the breathtaking backdrop of the blue mountains.
Echo point lookout sits in the middle of Blue Mountain National park, on the edge of a massive gorge. To the right, there are sharp cliffs; straight ahead, you can look out over the hazy blue-green mountains; and to the left, are the famous “Three Sisters!”
The Three Sisters are three rock outcroppings that stand straight up out of the mountain, side by side. It doesn’t sound like much, but set against such a beautiful backdrop in the Sunshine, they are wonderful to see.
After some mandatory photos, I set off to find some hiking trails. The waterfalls were a two-hour hike one direction, but I figured I’d start with a 15 minute walk to the Three Sisters first.
For such an easy walk, there weren’t many people on the trail. 15 minutes there and back?! How could you not check them out a little closer?
A few minutes in I spotted the first one. It was covered by some trees, so I kept walking to get a better view. Still closer, the trees blocked me from any kind of a good shot, so I kept following the path down some stairs.
I walked lower and lower, expecting to stop at some sort of a lower viewing platform where I could look back up at the sisters. But I just seemed to be going further down…
The only person around me was a young Asian guy about 5 steps behind me. After descending what felt like 200 steps I turned to him
“You’re carrying me back up, right?” I asked
He froze, shocked.
“Uhhh…no,” he stammered “I don’t think so” then he looked up and saw that I was clearly joking.
“Okay fine” I said “What’s your name, where are you from?”
“Daniel. From Korea.” Then he added “Totally South though! Totally South, don’t worry!”
I laughed, “Ya, I hear the North doesn’t get out much.”
He thought that was hilarious and we became instant friends. Turns out Daniel was in Australia on a working visa and was in the middle of his three month of mandatory farm work up in Darwin. He had the most Australian job I could think of.
“I work at a crocodile farm. Second largest in the world! I feed them chicken heads and make them very very fat and then I kill them and give them to my friends in the butchers!”
No way. That is crazy!
Apparently chicken heads are disgusting (and I don’t doubt it) but Daniel won for most random Australian job I’d heard of on my trip. So we chatted more about it as we continued down the stairs together.
It wasn’t long before we came across a young girl from Brazil sitting on the side of the stairs.
“900! Can you believe it?”
“900 what?” We asked
“900 stairs to the bottom! My boyfriend is counting them, but he went ahead.”
What? I thought this was a 15 minute round trip walk! What had I gotten myself in to?
Turns out I passed the 15 minute turn around point, and in my frustration to get a good picture, had missed the sign that said “very steep steps. Advanced hikers only. 900 stairs”
Great. We had already gone down 500 of them.
So the three of us continued slowly down, in hopes that there was some other way out. When we neared the bottom, we ran into the Brazilian girl’s boyfriend.
“The bottom is just there. The only other way out is a half hour walk from here then a tram that costs $17 to go up”
We all looked at each other… Nope. Too poor for that. Hiking back up the 900 steps it was!
It was a long haul. And it made me realize how out of shape I am these days. My legs felt like jelly by the time the four of us clambered to the top.
“905!!!” Yelled the Brazilian guy “they lied to us! There’s 905!”
“I want my money back!” I announced. Too bad we’d done it on our own free will…
After that Daniel and I hiked the stunning trail to the waterfall. Unfortunately I was pressed for time and had to catch an early train back into Sydney so I could make it south to Cronulla for the night. But I walked 3/4 of the way to the falls before saying goodbye to my hilarious new friend and walking back toward Echo Point alone.
I grabbed a quick lunch, hiked the 30 minutes back to the station and headed towards the city. And even though my legs felt like death, it was a perfect Blue Mountain excursion! 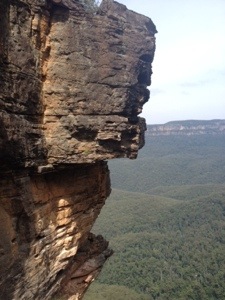 1 thought on “The Blue Mountains”