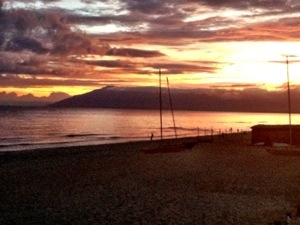 The day after the party, we woke up early and hit the road. It was just a few hours in the truck to our second stop along the lake: Kande Beach.
Today was Australia Day, and considering about 80% of our group is Australian, this was a big day. We stopped in town for all the essentials: fruit, snacks, the strangest outfits we could find at the market, and a stupid amount of alcohol.
For the afternoon we planned to make a punch bowl that filled our group sized cooler box. We cut up fruit, poured in a couple boxes of juice, and topped up the rest with 10 bottles of booze. It was potent. Then we each picked names from a hat. Whosever name we drew, we had to give that person our wacky outfit for the evening. We began the festivities at 3:00 with a game of Kings and when the cooler was sucked dry by dinner time, we continued at the campsite’s bar until things got messy.
Kande Beach has a beautiful campground. In celebration of Australia Day, many of us upgraded from tents to chalets right on the beach. It was a great treat for $8. The chalets were spacious, had electricity, a gorgeous view of the lake, and most importantly, comfortable beds!
Our full day at Kande beach was pretty laid back. We spent the morning playing rounds of pool, ate way too much food at the camp’s café, and rented a paddle boat to check out Kande Island.
Although it sprinkled in the morning, by 2:00 it was nice enough to head out on the open lake! A few people in our group took a speedboat out to the island to snorkel. Kelsi, Nick, Sandy and I followed much slower in our four man paddle boat.
The island was pretty small, taking us about a half hour or so to climb the rocks all the way around the outer edge. We found some big rocks for the boys to go cliff jumping off. Nick had a pirate cape that he refused to take off during the entire island excursion. He looked like some flying super hero as he dove head first off the cliff, with the pirate flag flying out behind him.
Sandy and I spent time stalking Luke as he snorkeled around the back of the island. We must have spent a good 20 minutes following him sneakily around the rocks. we ducked behind rocks and hid in crevasses each time he came up for air, then eventually, Sandy found a place to dive in and scare the daylight out of him. Ahh the little things that keep us amused.
After a while Kelsi and I swam back to the paddle boat while Sandy, Nick, Luke and Robbo all went snorkeling. Then finally we started our trek back to land to dry off.
That evening was very laid back. After dinner, I bought a local game called Bao off a young guy called “Brown Bread” a few of us played a few rounds at the bar, then I’m pretty sure we were all headed to bed by 8:30: our last and final night in Malawi! 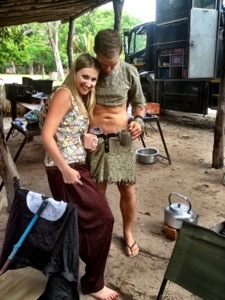 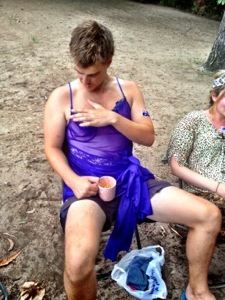 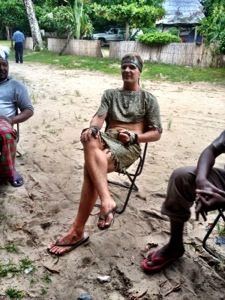