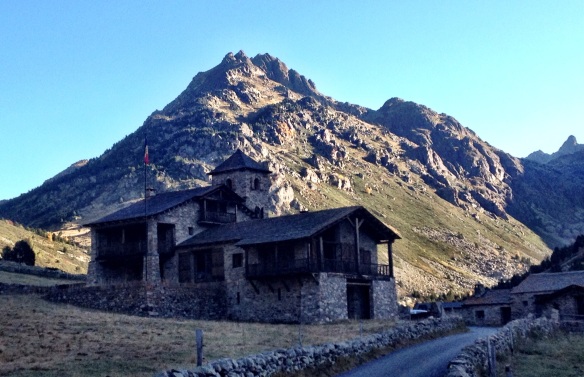 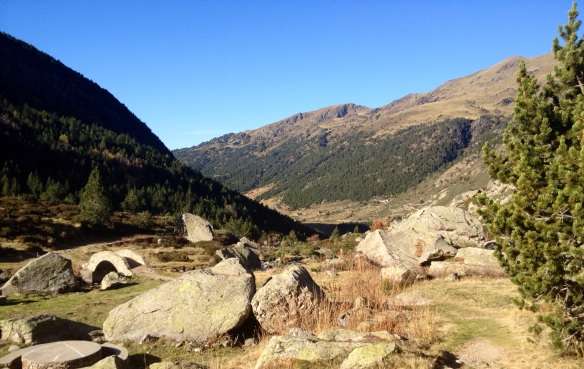 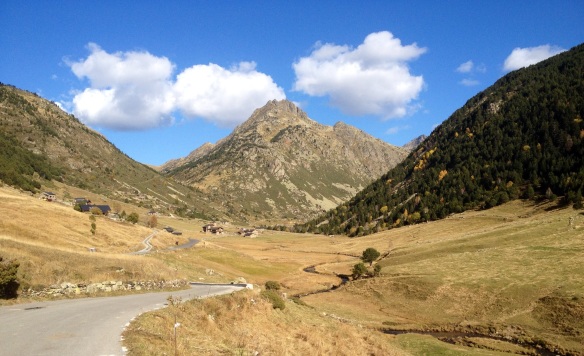 As I drove out of Spain and over the Pyrenees into Andorra I had a sudden realization: I have no idea what language they speak in Andorra. Spanish? French? A language all of their own? Not a clue.
I decided to come to Andorra based entirely around one thing: a google image search. I typed in “Andorra” and a beautiful photo of Andorra La Vella, nestled in a valley popped up. I was sold. That was the entirety of my research on the country…
But as I stood in the lobby of my hotel, staring blankly at the receptionist, mouth agape and yet not saying a word, I felt like I should have done a little more homework. It was an awkwardly long pause as I waited for the receptionist to speak first, anything to give me a hint of what language I should say hello in. The street signs were unhelpful, there were minimal people chatting in the streets, and then I found myself in the lobby, not knowing what to say.
“Adeo” said the receptionist finally. Amazing! They speak Catalan! It wasn’t that amazing, since “adeo”, meaning “hello”, was the only Catalan word I knew. But at least I was getting somewhere.
Then before I had time to answer, she followed up with “ca va?”
Oh no. Maybe it’s French they speak! Once again, my conversational French is limited to basic greetings, so I decided to respond in English.
“I have a booking” I said with a smile. She stood and looked at me with a confused face. Clearly English wasn’t one of the languages they spoke here. “A reservation?” I tried again.
“Ahh! Si! Por su puesto!” She answered in Spanish, and then grabbed the reservation book. I was utterly confused. Three sentences, three different languages. I still didn’t know what they spoke here. So when I had been successfully checked in, I sheepishly asked in Spanish “this may be a stupid question, but what language do you speak here in Andorra?”
She laughed “Spanish, French, Catalan, it doesn’t matter!”
And that was that. For the next three days I was greeted with a mix of “ca va” “hola” “bonjour” “que tal” “adeo” the three languages were used almost interchangeably. Lucky for me, I could get by on basic Spanish.
My hotel was located right smack in the middle of the capital city. But seeing as it took only ten minutes to walk from one side to the other, and the population is only 22000, it felt more like a town than a capital. Regardless, the city was gorgeous. It was a stereotypical ski village: curled up in the mountains, stone chalets scattered among the hills, and a crisp Fall air. It was like Banff or Jasper with zero tourists. October is a VERY off season in Andorra. With no snow for skiing and little sun for hiking, most people avoid the little country this time of year. But the days I was there were beautiful: sunshine all week! Crisp mornings and warm afternoons. Autumn was just beginning, the leaves had begun to change, and the city was gearing up for the winter months. A man in the streets was celebrating the winter cheer early by LITERALLY roasting chestnuts on an open fire in the middle of the main square.
I spent a couple days in Andorra La Vella walking the upper paths that lie behind the city along either mountain. It’s a 10 minute hike straight uphill, but then a cobblestoned path runs flat along the entire length of the city. It was a popular route for locals heading home: many people had small homes with large vegetable gardens stretching all the way up the hill; the agricultural center of Andorra. It also had spectacular views of Andorra below. All the locals greeted me as I passed by. Everyone was ridiculously friendly.
After my city exploring, I went to the Information centre for some pointers on good hiking spots around the country. The man at the desk was so helpful and so enthusiastic about his country, I actually changed my itinerary to stay longer so I could fit it all in. I went back a few days later to thank him for his recommendations and he was so thrilled it looked as if he was going to cry. He even came out of his little hut to hug me goodbye and said he would have many more spots to suggest next time I visited.
I couldn’t take enough photos of the city, around each corner there was a new adorable little building with a dramatic mountain backdrop. Each time the sun moved I felt like I needed to hike back up to the walking paths for more panoramas. I loved it.
Then on my second day in the country I visited Ordino, a smaller village a half hour north of Andorra La Vella, and I was even more blown away. According to the guy at the information center, Ordino was the most beautiful town in all of Andorra, and I believe him. Most of the shops and restaurants were closed for the off season, but it didn’t take away from the beauty of the cobblestone streets and winding walkways. I spent the day hiking through the hills around the area. My discovery of the Active Tourism Andorra app was a life saver! It listed hiking, skiing, and biking routes all over the country. It grades them on difficulty, gives you a map, and if you’ve got 3G (which I sadly did not) it will follow where you are on the map and find the path for you if you get lost. It was wonderful, and I was able to find a tonne of little trails to explore. I was so happy about my day in Ordino that I decided to stay another day to hike the other areas I’d been recommended! And if I didn’t have other places to be, I could see myself easily getting stuck there… 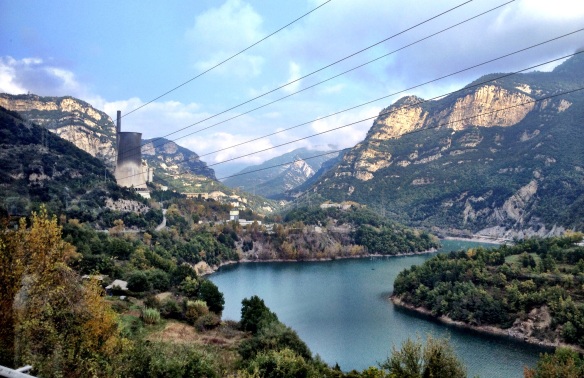 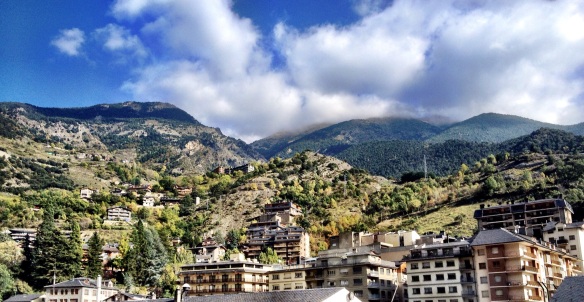 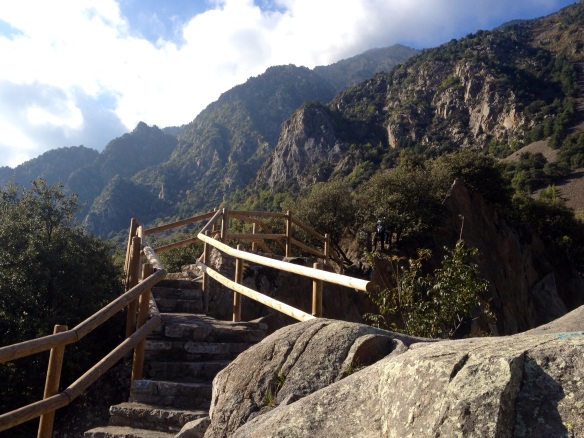 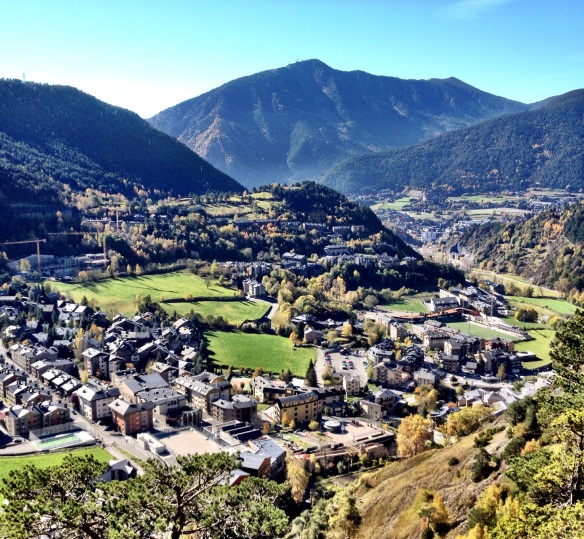 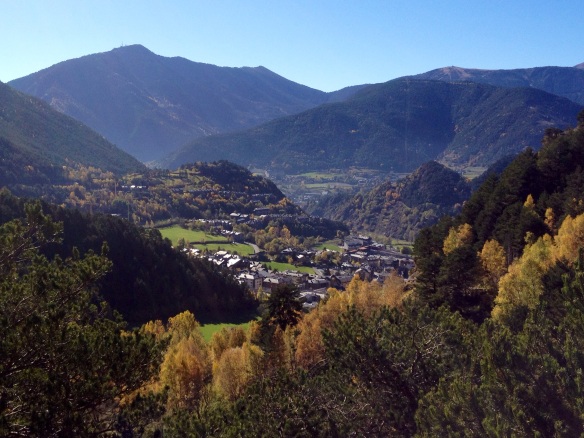