For those of you interested in hearing about our time in Curitiba, I’m sorry, we missed it. Our long bus ride from Campo Grande, apart from being 10 hours longer than our ticket said, was an additional hour and a half late. We rolled into the city close to half past 7 in the evening, and seeing the size of the city, had no desire to search out a place to stay, only to jump on a bus bright and early in the morning to head to Blumenau, our intended destination. So we arrived in Curitiba, went to the ticket counter and booked a bus right to Blumenau 45 minutes later. Another 4 hours on a bus to go.  We heard about Blumenau, only a week and a half ago, and instantly decided we wanted to go. We have been enjoying Skol, Brahma, and Antarctica, Brazil’s mainstream beers, because they are light, refreshing and perfect to sip on at the beach or patio on a scorching day; however, we still craved a better tasting and more full flavored beer.  Due to the overwhelming number of immigrants from Germany, Blumenau has a very traditional European feel to it. It also has several German breweries, all of which produce the best beers in all of Brazil (arguably South America). “The Best Beer” is way too tempting of an idea for Adam and I, and so, we went on the most epic, 46 hour adventure in the wrong direction, to spent only 7 hours drinking… Ridiculous? Yes. Worth it? Absolutely!

We pulled up at the Blumenau bus station at 12:30am, after 36 hours of traveling, with absolutely no plans. There is no information on Blumenau in our Lonely Planet guide, the bus station has no tourist desk, and everything else was closed. We were both exhausted. Although my iPod battery is in its last 10% of life, I manage to steal some wifi from somewhere in the terminal. Lucky!  We check out the hostel world app and there is only one hostel listed. Adam gets only the address written down before the wifi cuts out and we lose it completely. We don’t know the name of the hostel, where in the city it is, how much it costs, nothing: just an address. So we find a cab, point to the address, because, even after two weeks, I only know “thank you” and “goodbye” in Portuguese, and people are understanding less and less of my Spanish the further from Argentina we get. The cab drives all across town and ends up pulling into some small alleyway with no lights and no people. We drive up the road for a bit, our driver clearly looks confused, and then he pulls up to a random house that says 271.  He speaks no English or Spanish, and us no Portuguese. We have no other address or name, so our only option is to get out and knock. Adam rings the buzzer and a man comes down, clearly half asleep, and in his boxers – it is 1am. “Room?” we ask. He looks at us blankly and confused as his wife walks up behind him. Then all of a sudden, he wakes up and opens his eyes really wide “ROOM! Yes, yes! Un momento!” He puts some pants on, unlocks the door and rushes us into the house. He speaks a little English, and a lot better Spanish, which is a relief. With our Spanglish conversation, we book ourselves two beds for a decent price in a room to ourselves. He and his wife are so sweet and give us a broken old fan, and some fresh sheets. I think we are the only people staying in the place, and they seem happy about the business. We go straight to bed and sleep for 9 hours. I don’t even realize that the mattress feels like a rock and the pillow is lumpy. The fan feels great and the fact that I’m not sleeping on a bus makes me feel like I’m in a 5 star resort!

The next morning we head to the bus station, and drop our bags; we book a night bus to Sao Paulo and head to the brewery! Eisenbahn is a brewery just outside of town. It brews 10 types of beer that you can also buy around town in bottles, and is the most famous brewery in Blumenau – having won several awards! We get there at 2pm and the place is closed until 4. We are a little crushed after such a long excursion, but we cheer up when we find a local pub a block down the street. The clientele reminds me of the Squarerigger pub on a Thursday afternoon. A bunch of old men, all regulars, who are more than happy to drink beer all day and chat up anyone that is not a regular in the bar. No one speaks English, but one old man comes up to us to have a conversation anyways. He speaks Portuguese, I explain I only know Spanish, he thinks we are German and spits out a few words to us in German. We managed to get across that we we’re Canadian here on vacation to drink the best beers in Brazil. He laughs, and luckily speaks some Spanish, and then explains the history of Blumenau to me.  He describes about the immigrants coming from Germany, but I only pick up half of what he’s saying. I nod and smile nonetheless and ask some questions I think are relevant to the conversation. (Yes Caitlin, old men telling me life stories even happens to me in Brazil- nothing has changed since Ireland, except instead of not understanding accents, I don’t even understand the language!). As Adam points out afterwards, this is my first Portuguese conversation! We high-five about this, even though I didn’t speak one word of Portuguese. We order another Skol, the cheapest we’ve found in Brazil yet, and pre-drink for the brewery! 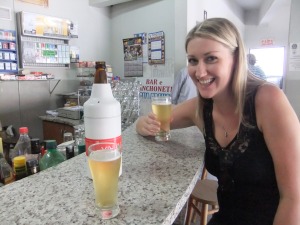 By 4:00 we are already tipsy, so we stumble over to the brewery. There are so many options of beer, so we start at the top of the list and work our way down! There’s Pilsen, Kolsch, Pale Ale, Weizenbier, Dunkel, Raucherbier: you name it, they’ve got it! As well, they perfectly pair each item on the food list to its proper beer. We shared a schnitzel dish with mustard and tried nearly every beer on the menu throughout the afternoon. There was even champagne they made there called Lust! I got very excited, but it was R99 for a small bottle ($60) so we took a photo instead! Much more economical 🙂

After the brewery we went downtown to walk the main streets. It was like walking through a traditional little German village! The architecture was unlike anything else we’ve come across in Brazil, but the atmosphere was still lively! You can definitely see how this city holds the second largest Oktoberfest party in the world! We stopped at another pub right in the middle of town and had dinner on the patio (with more delicious beer of course). And afterwards we headed to the bus.

I’m not exactly sure what we were thinking when we decided to take a 10 hour night bus drunk, but I can tell you I won’t be doing it again. We figured we would just pass out right away and the beer would help us forget the noise and movement. This might have happened, until we decided to search out the cheapest bus that Brazil has to offer. The seats went back about 2 and a half inches, there was no leg support, the bus lurched over the cobblestone roads and potholed highways and I slept for probably about 15 minutes total the whole night. Not to mention, everyone was already in “sleep mode” when we hopped on the bus, while we were in “party mode”. So we spent the better part of 2 hours telling stories and giggling on the bus in the dark trying not to disturb the sleepers before we decided to try to get some shuteye. All in all, we spent 46 hours getting to and from Blumenau, and spent 20 hours actually in the city (9 of which were spent sleeping). I dare anyone to come up with a larger mission to find good beer! Our bus to Sao Paulo was on time, and we arrived in the station at 7:15 am on zero sleep. We found our way through the metro system and arrived at our hostel 4hours and 15 minutes before check in. Fantastic…