Our flight to Bogotá left at 3:58am from Manaus, had a 45 min layover in Panama City, and finally arrived in Colombia just after 9am local time. I’m pretty sure we were sleepwalking to our hostel from the lack of sleep we’d had. Short naps, no longer than 30 min on each flight, 3 hours the evening before, 2 hours Thursday, and 6 DAYS in an uncomfortable hammock before that. All we wanted to do when we arrived in Bogotá was go to bed! When we arrived about 10am, it was still 2 hours to check in. We passed the time staring at a wall until we were finally allowed to crash in our room for a couple more hours.

We took it pretty easy our first day. Hung out drinking coffee at a local cafe, then walked around the city, checking out its bustling streets (with lots of crazy homeless people). One huge difference in Bogotá was its temperature. It was absolutely freezing (If the freezing temperature was 10 degrees Celsius)! The city is at such a high altitude, that even the sunshine during the day is several degrees cooler than we have been acclimatized to. Both of us bought a pair of jeans, and I spent two days wearing three layers of shirts.

After a good night’s sleep it was time to do some sightseeing. We went up the cable cars to the Cerro de Monserrate, which is a lookout over the whole of Bogotá. The city is mostly just urban sprawl for as far as the eye can see, but the mountains on the other side are gorgeous! At the top of the lookout there is a church, which was packed with people on the Sunday that we went. There are also a bunch of souvenir stores and a plethora of eateries for a snack or a full-fledged Colombian lunch! 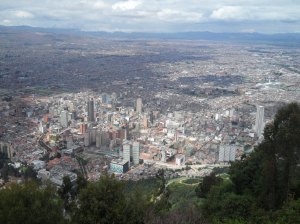 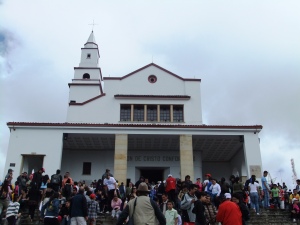 Instead of spending our afternoon in museums, we decided to check out the Catedral de Sal in a city just outside Bogotá. A local Colombian we met in Sao Paulo a month earlier recommended the “salt cathedral” to us.  He had said it was one of his favourite things in Colombia. So we made the two-hour trek to Zapateria to check it out. Surprisingly, we figured out the bus system in Bogotá (which is a hundred times more difficult on Sundays) and ended up in Zapateria within a short couple hours.  The city was absolutely beautiful. It sported large brown brick churches, bustling cobblestone plazas and had a rustic, small-town feel. Zapateria is nestled in a little valley, with gorgeous green mountains towering over it – an idyllic little getaway from Bogota’s much less aesthetic surroundings. 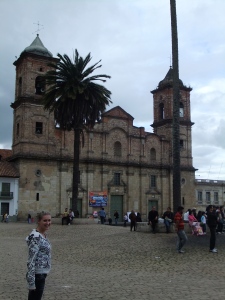 The Catedral de Sal is an underground system of tunnels that have been designed into a church that stretches over a huge space. The walls of the tunnels are covered in salt deposits that have built up over the years, thus the name “the salt cathedral”. Our tour group was entirely in Spanish, and with the speed that our guide was talking, combined with his loud, inaudible microphone, it was almost impossible to understand what was going on. I picked up some dates – like 80 years and 6 years, but have no idea what they referred to. So Adam and I ditched the tour and explored the place on our own. 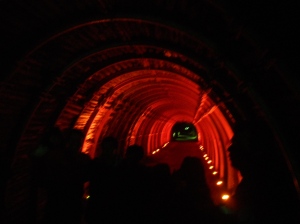 The cathedral was a huge labyrinth of passageways that led to large, stone-carved crosses and statues of religious icons.  These “points of interest” were spectacularly lit up in changing colours of glowing light. Bright red one second, then the statue transforms into a softer green or electric blue. The place was so surreal; one moment everything is shrouded in the darkness of the cave, then all of a sudden, larger than life carvings glow into focus. 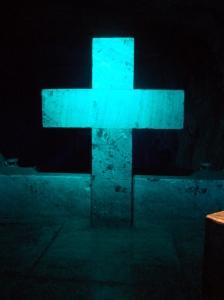 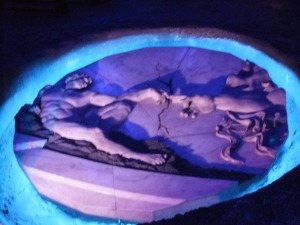 Most of the crosses that we’re scattered about the cathedral were about 6 to 10 ft high, but as you wound your way down to the main cavern, there was a huge display with an altar, a few larger than life statues and a cross that stood about 60ft high. Pews were lined up and the place very well could be used as a functioning church: although without our guide there to explain, I really have no idea. We spent at least an hour exploring the strange underground cathedral before finally climbing back up to the daylight and finding our way home. 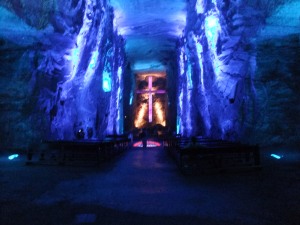 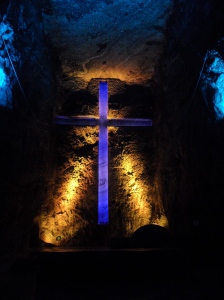 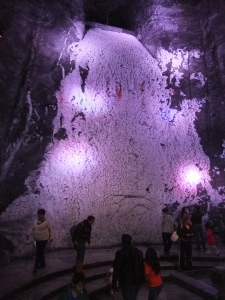 The next morning we set out on a 12-hour bus ride to Medellin. Just getting out of the city to the bus station was an ordeal. Our taxi took 20 minutes to make it only 6 blocks along the city center. The streets were completely crowded with buses. Big city buses, tour buses, mini buses (which seems to be the favoured mode of transportation around Bogotá), but all of them were empty! The place was one huge gridlock traffic jam with hundreds of empty buses. I never saw one bus with more than 3 people on it. It was a strange sensation to say the least.

When we finally did catch our bus to Medellin, we were placed in special “gringo seats”. These were seats that were about 6 inches closer to the chairs in front than any other seats on the bus. Immediately the young guy in front of me reclined his seat back to its full potential, crushing my legs and essentially leaving his head in my lap. I had to spend the bus ride with my legs in Adams leg space, and his in the isle, because even with an upright seat it was impossible to have your legs in front of you. After 10 hours of this man stretching and pushing back on the seat, I thought I was going to murder him. I just wanted to rip off his little green hat and throw it off the bus!! It didn’t help that we lurched through windy mountain passes the entire 12 hours and I was in a motion sickness haze for the better part of the day. Luckily, the man arrived alive, and I am not wanted by the police for murder… But let me tell you, it was close!