Just outside of La Paz exists the world’s most dangerous road. Now titled “Death Road” from the number of people that have died driving on it, this highway used to be the ONLY means of transport between La Paz and a good chunk of the rest of Bolivia. Finally, a 15-year project was launched to build a new, very much longer, but very much safer highway (if you could really call it a highway). Before the new road, about 26 vehicles tumbled over the edge and down the massive, vertical drop each year: very much deserving it’s “Death Road” moniker.

I first saw clips of The World’s Most Dangerous Road (WMDR) in the Top Gear “Bolivia Special” episode and have been having heart palpitations about it ever since. When Adam told me he wanted to mountain bike down it I laughed. I said “Nope, not me, I’ll wait for you at the bottom in a cozy cafe, you crazy SOB”.  Obviously that’s not what happened.

Okay, so you need to know one thing. I HATE biking. I loathe it! I don’t like cycling down a flat, perfectly paved street; I don’t like rocketing through trees downhill on a mountain bike; honestly, I don’t even like the stationary bike at the gym, it’s my NEMESIS. So I definitely don’t know why I thought I was going to enjoy biking down the WMDR in a third world country… But that’s what I signed up for.   The actual bike ride is between La Cumbre and a small town called Corioco. It is a 64km journey and a 3600m vertical descent, total time: 5 hours. 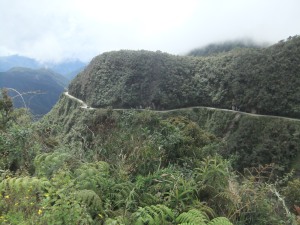 Our mini bus pulled up to La Cumbre just after 9am. It was breathtaking… As in, the altitude was so high it was difficult to breathe. Well, the 4600m, combined with the brisk early morning air and the idea that I was about to be rocketing 3600m downwards left me a little breathless. But also, there was a VERY beautiful lake, surrounded by what appeared to be very low, snow-capped mountains, but which were probably close to 6000m in altitude. We all put on our gear: elbow and knee pads, helmets, gloves, thick jackets and pants: the whole works. Although I was significantly warmer, I couldn’t help but thinking that NONE of this will be relevant if I go skidding off a cliff. Since the WMDR has opened to bikers, 15 have died… And I’m sure they were wearing just as much gear!   Nonetheless, we started our decent! 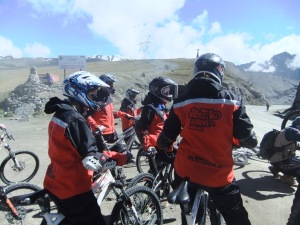 The first part was 32km of paved road with absolutely unbelievable views of the mountain range. The scenery was exquisite, and every time I try to describe the landscape here in South America I feel at a loss for words because everything is so larger than life and amazing. Death Road was no exception! Endless mountains, deep passes, green brush, rocky cliffs, and waterfalls all throughout… Oh yeah, and a windy road right in the center of it.

I actually enjoyed the first 32 kms (Shocking, I know. Don’t worry it doesn’t last long). I didn’t have to move a muscle; the downhill part kept me gliding onwards, then I would occasionally use my hand breaks when I needed to slow down, or pass a truck. I didn’t feel 100% confident on the bike, but if this was Death Road, then NO PROBLEMO SEÑOR! The 32km went by VERY fast. With all our photo stops and re-grouping to catch up it took us about an hour and 20minutes.

Afterwards, we stopped for a snack of sandwiches and cookies. Then our guide announced we were jumping back in the van. My heart leapt a little as I thought this might be the end. Unfortunately he continued with “then we’ll drive you all to Death Road”. What? That wasn’t it?!  That’s when I started looking at the photos of the people on the map he gave us. Pictures of people biking over huge rocks, gravel roads, through waterfalls… Awesome, I’m going to be wet at the end of the day too! (Another pet peeve of mine.  Just try to get me on a water ride at Disney Land). Okay, I’m a little more adventurous than I’m making myself out to be, but I’m pessimistic about biking all day… And this is how I felt at the time.

So our van pulls up on the start of death road and I’m pretty sure we’re all going to be part of next year’s stats for vehicles plummeting over the edge. Our driver backs up RIGHT to the edge of the cliff, so it’s possible for another vehicle to pass if needed, and leaves the whole left side of the van practically dangling over the edge. The German girl in front of me screams, I most likely went white and froze; who knows, I’ve blocked it from my memory (and I’m not even afraid of heights!). This was something out of my control.  For once I actually wished I was on my bike. At least I have control of that vehicle and don’t have to leave it up to the skills of our Bolivian driver.

View from the window as we parked

So our guide gives us all the safety rules of the road. How to pass other bikers (haha, as if I needed to know that), how to deal with oncoming traffic (not that there are many vehicles on the road, but we did encounter a few) and how to properly use a bike (something I actually know how to do, god help anyone who comes on this trip trying to LEARN how to bike).  So we set out, and I’m doing fine. I’m not a show off, so unlike Adam, I don’t feel the need to be at the head of the pack. I took my time and was not hating the experience like I thought I would.

The views were awesome, and because the road was rocky and steep, I pretty much rode my breaks for the next 28 kilometers: not good for the bike, but better for my sanity. After we stopped about three times for photo ops is when my hands started to hurt. I rode tensed up, trying to stop the shocks going through my body as I hurled over the rocky road. My hands couldn’t grip anymore they were so sore. Every time I tried to slow myself, my hands started shaking as if they were going to give out. My shoulders and neck were aching, and I stopped enjoying myself. I had NO PROBLEM with the height, OR the fact that I was on the WMDR. In fact, I forgot I was even in Bolivia! The dangerous road part had ZERO effect. I simply hate biking. I don’t like jolting over uneven rocks and skidding on scree and overusing my breaks, or going too fast.

Luckily, I managed to do some soul searching on the trip and realized where my unprovoked hate of the sport began. Turns out, when I was little, I went mountain biking through Mount Seymore parkway (either with school or Guides or something), and, down a steep, rocky hill, my breaks gave out and I had to cause myself to fall at the bottom of the hill before flying off the edge of the road and over a small cliff. I had entirely forgotten about this episode from my childhood until I was bouncing down similar terrain on this Deadly Highway… See, at least something positive came out of the trip!  Anyways, point being, as soon as my muscles hurt I wished the trip would end. But it didn’t. It still took 3 and a half hours to complete!  But enough complaining.

Although I missed a lot of the scenery because I was watching the road so intently, our guides took photos for us and I’m sure they’re amazing!  What I find the MOST amazing is HOW IN THE HELL this used to be a functioning road! A TWO-way road at that! During one of our stops, Adam and I watched a truck drive up a good section of the road from across a pass. We saw the truck, speeding along like he’d done this a million times with no care in the world. It was like a scene out of a movie, where a bus speeds down a highway and doesn’t realize the bridge is out ahead, but the whole audience is aware. Of course the bridge wasn’t out ahead, but around one of the corners the road got VERY narrow, and had absolutely zero rails, barriers, nothing whatsoever between the edge of the road, and impending death!

We stood, shell-shocked and horrified as the truck moved along the road, taking corners at speeds faster than I would allow my bike, until finally he came around the corner where the road narrowed. We, like disgusting tourists, had our cameras out trying to take photos as he flew around the corner. Then, just like that, he continued at the same speed like nothing happened; just as if the road hadn’t HALFED and his right wheels weren’t half on and half off the cliff! He just trucked on around the bends, through a couple waterfalls that left the road wet and slippery, and back onto the wider area (even the wider areas were no more than a truck width at best). I couldn’t believe it. No hesitation. Just like he was driving through a desert on a straight road. I nearly fainted watching him!

3 and a half hours later, we arrived in Corioco for a shower and a buffet lunch. The second we arrived I thought, “that wasn’t that bad”. But then I remembered how sore my hands and neck were and just shut up.  For those of you who are wondering, Adam absolutely loved it!  So has every single person I’ve talked to that’s done it. Don’t let my hatred for bikes deter you from going should you find yourself in Bolivia one day. I’m sure the views are worth it! 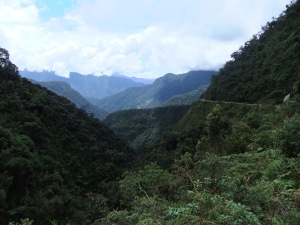 Adam said he had a blast the entire way down, despite his showing off and falling not once, but TWICE on the trail. He’s okay, not to worry, just boy wounds and a ripped shirt. One of his falls was right at the end, and then after he recovered, he stopped to help an older lady who fell as well. That allowed enough time for me to pass him and finish earlier… Which, whenever he jokes about how bad of a biker I am, I rub in his face that I finished the WMDR before him. Muahaha! It’s the little things. 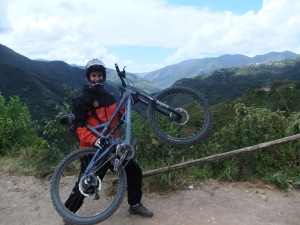 All in all, despite how much of a princess I’ve made myself appear in this post, I’m glad I did it. I can successfully say “I Survived Death Road”. It’s a story for sure, and we all know my old motto, “do it for the story”.    Well here’s another I’ll never forget…