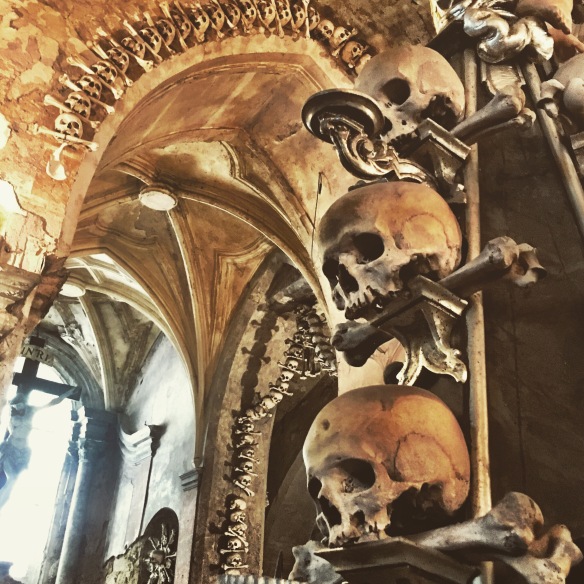 “We’re going to a church filled with bones!” I announced to Jodon as I came in from my day on the town. He looked at me over his computer screen, less than impressed.

“Ok. If you want” he said in the same nonchalant way he agrees to everything I suggest.

“My tour guide said it just made the top 100 things to see before you die list!” I went on, hoping for more enthusiasm.

“Ok.” He said again. Waiting for Jodon to be more enthusiastic about anything is like pulling teeth. I looked it up anyway.

The Sedlec Ossuary, better known as the “Bone Church” is a 15th century church in the Sedlec neighbourhood of a small town called Kutna Hora. The story goes, that in the late 13th century, the abbot of the nearby monastery, travelled to the holy land and received a small amount of earth. He sprinkled the holy earth around the abbey cemetery and the land became sacred. The cemetery soon became the most desirable place to be buried in Central Europe, and people came from all over to bury their loved ones. By the mid 14th century nearly 30 000 bodies were buried in mass graves within the cemetery grounds. After the Hussite wars and the Black Death, another 10 000 bodies were added to the area.

Soon after, a small church was built on the cemetery grounds to act as an ossuary for the dead. A half-blind monk was given the labouring task of exhuming the bodies and placing them in the chapel. The monk took the bodies and arranged the bones in elaborate decorations around the chapel. He built garlands of skulls, a detailed replica of the Schwarzenberg coat of arms, and an insane bone chandelier that held at least one of every bone in the human body. Legend has it, when the monk finished with all the bones, he miraculously regained his sight. This is the Sedlec Ossuary.

It was a quick one hour train ride to Kutna Hora from Prague. We met a couple travellers on the train that had equally limited knowledge of the ossuary.

“Do you even know what this is?” One of them asked us on the train.

The consensus was: there were going to be lots of bones.

The church was smaller than we imagined. Just a modest-sized, simple church from the outside. The steps at the front led down to the underground ossuary where the bones were held. The remains of 40000 bodies lay within this small church. Four massive bell-shaped mounds of skulls were found in each of the four corners of the church. The ceilings and walls sported garlands of bones like some sort of twisted Halloween party decoration. The coat of arms hung on the wall and was so detailed it was hard to imagine these bones as belonging to real people at one time.

The place was strange, to be sure, and maybe a little eerie at points. All in all, however, we found the place to be slightly underwhelming. The chandelier that hung in the centre of the room was missing. It was taken out months ago for restoration purposes. I feel like that was the main focal point that made the church so impressive. Still, it is hard to grasp the reality of it all. Some people argue that there are closer to 70000 bodies found within that tiny church. 70000 people. It’s hard to fathom. Nonetheless, the trip was worth it. The Sedlec ossuary is up there on my list of bizarre attractions in the world, and we met some pretty great people along the way. 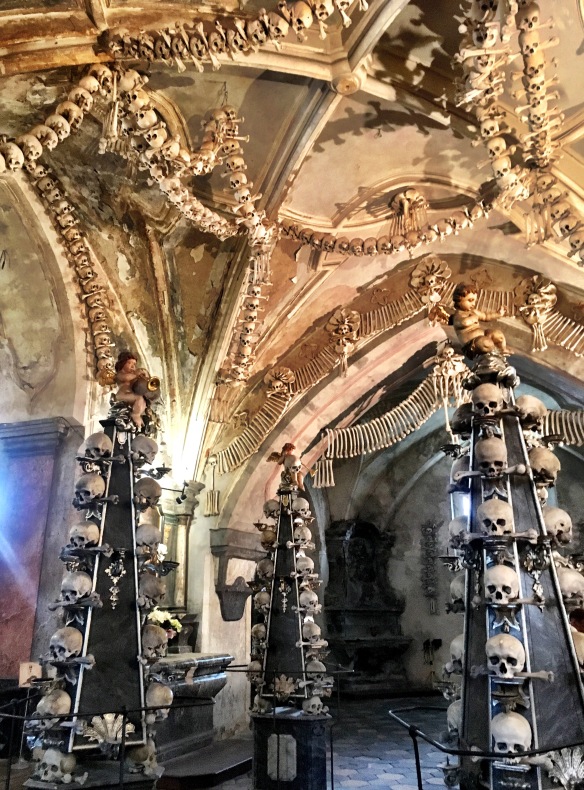