We arrived in Manaus in the early afternoon and decided to team up with Hilary and Diane to find a good hostel. After walking through the port, we met Thomas: a charismatic native of Manaus with a great sense of humour.  Thomas recruits and refers tourists to his hostel and organizes their stay. Tours, places to eat, things to see, you name it, Thomas will help you organize it and then introduce you to 5 other people who have already done it. His grasp of the English language is impeccable, and he is exactly the kind of person we all wanted to meet upon arrival. Strangely enough, having recruiters swarm you at bus stations and ports is something I kind of miss from Asia, and it’s infinitely easier than walking around the city from hostel to hostel with a 15kg backpack on!

So just like that, we had a cozy place to stay, with a room just for the 4 of us, and were sitting down organizing tours within the hour. Sadly, Adam and I had only one full day to spend in Manaus, so we booked a day tour for the Friday and hoped to see as much of the city as possible!  After we were hooked up with a cheap seafood dinner of local Amazonian fish, we were offered a free, private walking tour of the city from Thomas’ brother (or sister as he jokingly referred to him as).

The markets in Manaus are incredible. The less impressive fruit market was quite a sight to behold.  Truckloads of fruits and vegetables collected from the jungle, lay over huge wooden palates waiting to be bought.  A massive variety of tropical fruits and vegetables to choose from and a stack of bananas larger than I’ve ever witnessed!  Afterwards we walked over to the fish market.  The market was slowing down by the time we arrived in the evening, but at 5am, Manaus’ fish market explodes with people trying to get a deal on fish for the day. There are apparently over 2000 different species of fish to be found in Manaus, and the fish market is where you can get most of them.  Row upon row of stalls where fisherman slice up their catch and prepare the food for buyers.  Anyone can buy fish at the market, but it is particularly popular with restaurant owners buying their daily specials at the crack of dawn. 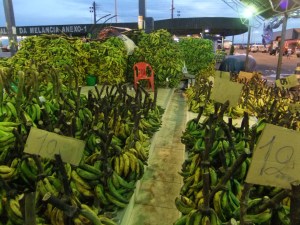 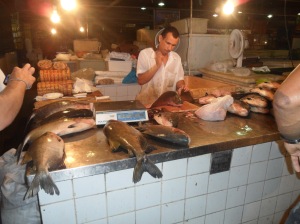 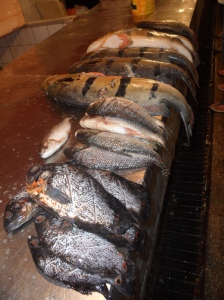 After the markets, we walked through the city checking out it’s main sights: the opera house, the university and the many beautiful plazas that are scattered throughout. I was amazed at how industrial and beautiful Manaus really is. It is a booming city with a very strong economy and is WAY larger than I would have imagined from a city in the middle of the jungle. There are over 400 factories in Manaus, many of them big name car companies and appliances. It’s even one of the largest microwave distributors in the world. Random. Manaus is a city where people from all over Brazil come to get work. It has such a huge workforce that there are always places to find a job. Before Southeast Asia began its rubber production, Manaus was the largest rubber exporter in the world. The rubber production made for an extremely wealthy economy. The place was so rich, that the women would have all their clothes shipped to Europe to get them CLEANED instead of doing it themselves, and the men would smoke cigarettes through dollar bills.  If only I could afford these luxuries!

When we arrived back at the hostel, Thomas had pitchers of caipirinhas waiting for us. It wasn’t long before we met a bunch of Colombians, Swedes and Spanish guys outside and joined them for drinks. We sat in patio furniture on the street and attempted to understand our trilingual conversations. We drank and sang Spanish songs like “La Bamba,” with the accompaniment of Juan-Carlos’ guitar, for what seemed like hours. Then we all headed out on the town till the wee hours of the morning!

When Adam’s alarm went off at 7:30am I was a zombie. We had a maximum of 3 hours of sleep, although no one really checked the time we finally fell asleep, so it could have been less. So excited for an 8 hour day tour of Manaus…  not!  Turns out it was just Adam and I on the tour with a man that didn’t speak English. Not sure how we always end up on private tours, but it seems to be a trend for us in Brazil! I was in no condition to translate Portuguese, but our tour was amazing nonetheless!

We took a boat out to the meeting of the rivers to start. This is where the Rio Negro and the Rio Solimoes converge to make the Amazon. Because of the amount of acid in the water, the Rio Negro is a very dark, almost black colour. Contrastingly, the Solimoes is a light brown, muddled hue. The acidity and temperature differences between the two rivers keeps them separated, and thus there is a very defined line where the waters meet that stretches for about 6km! We could actually feel the temperature differences as we traveled between the two on our boat. 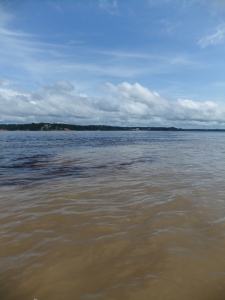 As we were boating to our next destination, we FINALLY saw the elusive pink river dolphins! Adam has been talking about these pink dolphins since day 1 of our trip. They were on his trip’s bucket list before anything else in fact! So it was very exciting to see them in the wild. They are the only fresh water dolphins in the world and no one quite knows how they ended up in the Amazon. It is believed that perhaps they migrated into the river up to 15 million years ago! Their brains are 40% larger than a human’s and they are unique in that their neck bone is not fused with their spine, giving them a lot of mobility in their heads. The dolphins are a light grey colour with pink around their heads. A number of strange local legends surround the animals; it is said that the dolphins shift shapes in the night to impregnate women on land! We did spot a couple in the distance when we were on our 6-day trip, but seeing them up close was very cool!

When the dolphins swam out of view, we boated through a floating village that both survived and made a living off the river. Local fisherman caught pirarucu fish from the river and kept them in large tanks to sell them at a later date. The fish are massive!! They can get up to 180kilos and small ones are still a whopping 90kg. One of the fishermen tied small fish to a wooden pole and let us try to fish for them in the tank. They snapped at the fish, literally jumping out of the water to grab the food, but it was practically impossible to reel them in with the weight of them; however, for lunch afterwards, we got to eat the fish as part of our buffet. Which was fun, even though we didn’t catch one ourselves. 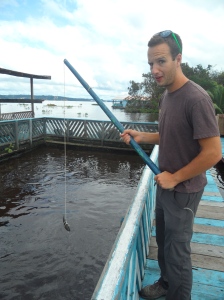 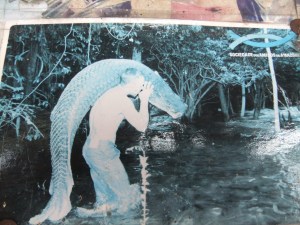 From there, we walked through the ecological park to the giant lily pads! Seems that everything is a little larger in the Amazon, and these lily pads were no exception. They got up to a couple diameters each, and were a beautiful display among the calm lake.   I couldn’t take enough photos of them if I’d tried! 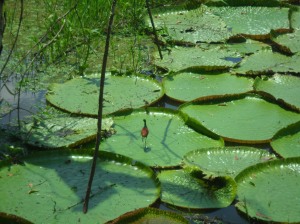 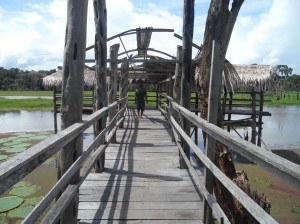 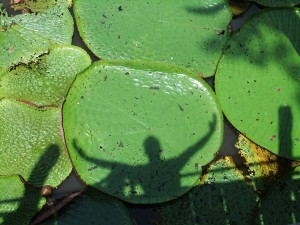 Once we’d explored the park, and had some lunch, we visited one of the floating homes and met up with two children: a young boy about 10 and a girl no older than 5. The little girl clung onto a baby caiman, with it’s mouth tied shut, like it was her own little stuffed animal. She dragged it around without even thinking twice that she had a tiny dangerous animal swinging from her hands! Next to her, the young boy was bear hugging a sloth! The two hopped in our boat and offered us the animals to hold. Adam and I were ecstatic! The sloth was one of the most adorable things I’ve ever seen. I’ve only ever spotted the animals in trees, moving around slowly and clinging to a branch for dear life. But up close, they have the most ADORABLE faces.  They have big black eyes on top of a long face and a neck that turns around almost a full 360 degrees. And they are so light! I was expecting the sloth to be much heavier than it was, but it couldn’t have been more than a couple pounds. It’s long claws wrapped around me in a huge sloth hug and then the animal seemed content to just hang out in my lap. So cool! After Adam and I played with the sloth for quite some time, we checked out the caiman. It was so little (no longer than a foot and a half from head to tail) and had huge green eyes that stuck out of its head. It felt just like a snake, but looked a little more ferocious with its teeth sticking out under its tied jaw. It was surprisingly calm however, and allowed the little girl to grab a hold of it as if it was her childhood blanket. We paid the kids a couple Reais for their time before continuing on with the tour. 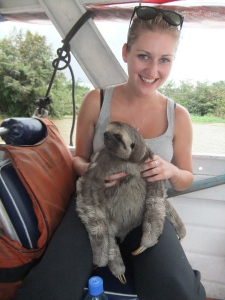 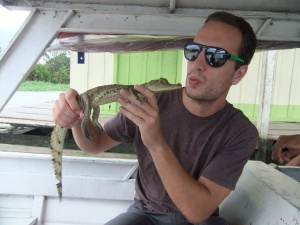 Our guide then took us on a boat ride THROUGH the jungle. Because of the flooded waters, the forest was no longer walkable; instead, we cruised through the tall trees and thick forest with unbelievable dexterity in our giant boat. I have NO idea how this man maneuvered through the trees that were at points no wider than a half inch on either side of the boat, but he did it! It was a beautiful trip and a very unique way of trekking through the area!   Photos did NOT do this part of the trip justice.

Finally, we ended our trip with more piraña fishing! Although these pirañas were much less voracious than the ones in the Pantanal, we still managed to catch 7 of them and take them back to our guide’s friend for his dinner.   By the time we arrived back at the hostel we were exhausted! Out for an early pizza dinner in front of the opera house, then off to bed… for a nap. We only got to sleep for another 3 hours before we were up at 1am to head to the airport! Another long night with no sleep ahead of us… Great! 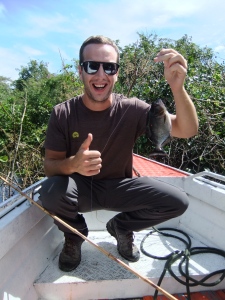