As soon as we stepped over the border into Chile, our travels ended and our vacation began. We decided that, for the last 2 weeks of our trip, there would be no more running from city to city every other day, no more crazy tours, just good food, good wine and lots of relaxing! San Pedro was the start of this.

We had finally made it back to warm weather. Very different from the morning’s freezing geysers, by the early afternoon, we had descended thousands of meters and ended up in the hot desert. San Pedro de Atacama is an adorable town, of just a few blocks, in the middle of the desert: a little oasis in an otherwise dry world. The place felt like it was straight out of a western film. Unpaved roads, horses walking through the main street: I felt as if a tumbleweed should blow through the place at any moment.

We spent the afternoon sitting in the sunshine and eating good food. Finally tried to get some colour after 2 months of cold weather! As the sun went down, we decided to grab a couple bottles of wine. Although we were a little shocked by the difference in price between Bolivia and Chile (I’m pretty sure Chile is the most expensive country in South America) we managed to find some cheaper versions at the minimarket. We sat out on the patio with some snacks with our new Aussie friends and enjoyed being back in wine country until our star gazing tour began.

Stargazing was the one thing we wanted to do while in San Pedro – and it was incredible! We had a small group of 4, the two of us and a couple from Brazil, and our two guides. We drove out to the Valley of the Moon, where a massive telescope had already been set up for us. It was freezing out, but, with no cities or lights around for miles, the stars were unbelievable! We spent two hours learning about the southern constellations and the names of the stars. We got to see Saturn so well through the telescope, that even its rings were clearly defined! We saw young stars like Sirius, that under the telescope looked EXACTLY like the most beautiful diamond I’ve ever seen. It is bright white and sparkling and, as people who love shiny things, Adam and I were totally sold! Then we checked out Beetlejuice, a red star that apparently is actually dead and gone, only its light is still reaching us from millions of miles away. Our guide had an incredibly strong laser pointer with him to properly point out which star he was talking about (which was helpful with so many millions of stars up there). We saw Mars, the Southern cross, all the astrological signs that could be seen during this time of year. In fact, I think the only thing we didn’t see in the Valley of the Moon was the moon itself! Apparently it was hanging out in the Northern Hemisphere somewhere… The tour was super informative, really fun, and to top it all off, the tour came with free wine!! What more could you ask for really!

When we arrived back in San Pedro at quarter to midnight, the sleepy town was already shutting down. So we went to bed early and prepared for another day of nothing.  The next morning, all we accomplished was dragging ourselves to a cafe on the edge of a beautiful little main square. We sat there eating, reading and drinking banana milk shakes all afternoon until it was time to take our hour bus ride to Calama. 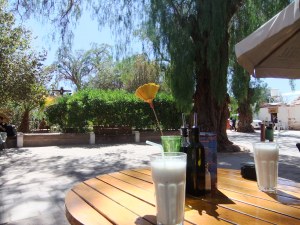 From Calama, the next morning, we had a flight down to Santiago… Yes, I repeat, a FLIGHT! We finally got our act together early enough to book a flight instead of taking yet another 24 hour bus ride South. To top it all off, the flight, with all taxes in, was actually $4 cheaper than the bus! Win/win situation!!  Mark and Oli were slightly less fortunate than us and had to suck up the bus ride while we slept in a comfy hotel room, left 10 hours later, and still arrived in Valparaiso 8 hours before them… Sorry guys. But after four months of buses, this was by far the most exciting mode of transportation we’d been on in a while. Less than a 4 hour trip from the North, to the beautiful coastal city of Valparaiso!